HAVE YOU MAILED YOUR PAYMENT?

Loudoun Mutual understands there are issues with the postal service delivering mail on-time,
in part due to COVID-19 and the holiday surge. If you have any questions about your payments
being received on time please contact your agent for options on how we can help you.

My Policy
Why You Should Choose Loudoun Mutual Insurance Company

Loudoun Mutual Insurance Company is rated A (Excellent) by AM Best, the premier insurance rating organization. A.M. Best ratings are issued on over 3,500 companies in more than 80 countries worldwide. Best's Credit Ratings are recognized as a benchmark for assessing a rated organization's financial strength as well as the credit quality of its obligations.

The Story Behind Loudoun Mutual's Logo

Looking through our archives, it appears the company began using its current logo in conjunction with the company's 100th anniversary in 1949. During that year, the new logo was used both in the annual report to the policyholders and in a book on the history of the company. This iconic image was chosen to be Loudoun Mutual's logo because it was typical of the fire fighting protection in use at the time of the company's founding in 1849. Our logo was originally designed by Betty Tiffany based on a "tub-pumper" built at the direction of George Washington.

The history of the tub-pumper on which our logo is based is very interesting. Two of our founding fathers, Ben Franklin and George Washington were active volunteer firefighters. The story indicates that during a visit to Philadelphia, George Washington saw the tub-pumper that was in use at Ben Franklin's fire company. In 1774, Mr. Washington commissioned a similar tub-pumper to be built for his fire company, Friendship Fire Company, in Alexandria, Virginia. This tub-pumper is still in existence today and is on display at the Friendship Fire Company.

For us at Loudoun Mutual, our logo has a lot of symbolism and relevance to who we are as a company today. The first mutual insurance company in America was started by Ben Franklin and his friends at their volunteer fire company after one of the fire department's members lost his house and didn't have the means to rebuild. Because the mutual insurance industry has its roots with volunteer fire companies, the tub-pumper is a symbol of the founding of mutual insurance in America. The tub-pumper is also a symbol of team work and neighbors helping their neighbors. When there was a fire, many neighbors came together to operate the pumper and help during their neighbor's time of need. Working hard as a team and helping our policyholders when they need us remain two core values for us here at Loudoun Mutual.

Many companies spend a lot of money on graphic artists and focus groups to design their logos. At Loudoun Mutual, we are glad our predecessors chose a timeless symbol of neighbor helping neighbor for our logo. It is a symbol that is just as relevant and stylish today as it was in 1949, or for that matter, in 1849, when Loudoun Mutual was initially founded. 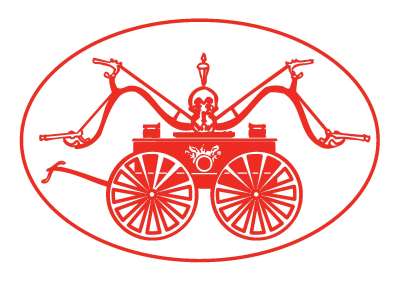